The Lusty Month of May

What if they opened up the economy, and nobody came?

The inhuman irony of half of US states choosing today of all days to begin easing restrictions on going back to work should not be lost on us. Forcing people back on the job on the very same day that the rest of the civilized world marks as a holiday for labor rights, when at least 63,000 citizens have already died and millions more infected, the message could not be more explicit.

Since nothing must ever keep Donald Trump from his Big Macs and other artery-clogging animal flesh, he has ordered that the country's infested meat-packing plants be kept open, worker safety be damned.

The common topic of debate among the pundits and the policy-makers is not over whether to give people universal guaranteed income and health care during the pandemic. It is over how many of our deaths are worth the return of unfettered capitalism, historic wealth inequality, and unmitigated greed.

The United States had "officially" abandoned its shameful eugenics and blatant Jim Crow policies only when our leaders realized that they had directly inspired the Nuremberg Laws and the Nazi extermination camps. Post-World War II, the American Century was declared by the victorious ruling elites whose propaganda goal was to become a kinder, gentler Imperium bringing democracy to the rest of the world and destroying the New Deal under the guise of fighting Russia and communism.

The pandemic has provided these rulers with a unique opportunity. It is accomplishing what mass sterilizations, voter disenfranchisement and cuts to social welfare programs never could.  In varying degrees of doublespeak and euphemisms, they recommend that the country "gradually" be opened up so that good old Laissez-Faire can do the trick. The fact that this pandemic is  disproportionately sickening and killing Latinos and Blacks in particular, and poor, sick and old people in general, is simply a fringe benefit for an oligarchy that has spent the last 40 years culling the American herd.

The designated working class guinea pigs of the oligarchic eugenicists are, however, refusing to go gently into that rotten night. Labor journalist Mike Elk, who has been tracking news reports of labor strikes throughout the pandemic in his Payday Report blog, notes this is no easy task, given that the pandemic has also accelerated the closings of local news outlets which otherwise would have been covering these strikes. As it is, the mainstream corporate press is accentuating astroturfed uprisings backed by right-wing groups. We are told that armed militias are out in force, demanding the right to die in the name of American economic freedom.

But as Elk reports, there have been at least 150 wildcat strikes since early March. Some have involved sick-outs, others were temporary walkouts settled almost immediately with employers.  It's as impossible to learn the true total of these labor actions as it is to know the full extent of Covid-19 morbidity and mortality in the deliberate absence of adequate testing.

And it's not just workers who are striking. It's the nation's renters. Estimates are that a third to as much as one half of tenants are unable to pay May rent, making it the largest de facto rent strike in the nation's history. Thus far, calls for a rent freeze for the duration of the pandemic have mostly fallen on deaf political ears.

As is the case with the mass wage stagnation which preceded the current unemployment crisis, the housing crisis has been brewing for a long time. The majority of low income earners were already paying more than half their wages on their rent before the pandemic threw them out of work.

As a whole, landlords are not only not sympathetic, they are acting downright psychopathic. On a personal note, my own landlord just sent me a notice increasing my rent by 16 percent beginning on June 1st - this is on top of the 25 percent hike he levied last year to keep up with the "going market rate" in my increasingly gentrified area. Fortunately for me and other abused tenants, though, the greedster did not supply the 90 days notice now required in New York for people who have lived in their apartments longer than two years. His self-defeating flouting of the law, coupled with the state's temporary stay on evictions, at least gives me and the others some housing security for the next three months, along with the time to fight the extortionist attempt at rent-gouging.

Our solidarity with one another is our strength. And the bastards know it. 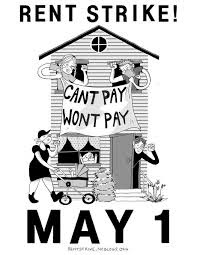 And there's no law that says we can't also be blissfully joyful as we go merrily astray, either.

Happy May Day, everybody!

Email ThisBlogThis!Share to TwitterShare to FacebookShare to Pinterest
Labels: may day, pandemic, strikes

One thing is clear: in any payments strike, renters have a lot less to lose than homeowners with a mortgage. Purchasers of real estate have in most cases made a significant down-payment, and since purchase, accumulated some equity in the property. Renters have none of that, so none of that to lose.

As Janis sang, "Freedom's just another word for nothin' left to lose".

In this case, freedom to take up the pitchforks and march on the castle. Go for it!

Interestingly, though, the plutocracy didn't allocate money specifically for rent relief. That implies that the powers that be think that they can successfully co-opt, suppress, or repress any serious protests, even by those with the least to lose. Time will tell whether they are correct or have made a giant miscalculation.

I apologize for not addressing directly the topic at hand, but I want to submit something else which is pressing.
Yet about that, suffice it to say this.
My absentee corporate landlord raised my rent another 5.4%, as annually has been done since taking over the building from small family ownership.
That was to have taken effect with my lease renewal on May 1st.
Several entreaties imploring them for a moratorium on rent increase until this pandemic crisis is over, finally, on April 30th, resulted in granting a two month extension at the former rate. Whoopee.
I cannot risk eviction or the cost of Pyrrhic Victory should I prevail in any contest.

Now, please heed this.
re: http://www.jackdogwelch.com/?p=30061
In that Jon Katz for "Beldam Farm Journal" begins:

"The first thing to understand is that President Trump is neither crazy nor stupid.
If he were either of those things, he would not be where he is, and I would not be writing about him, and you would not be reading what I write.
In political terms, he has accomplished the impossible and is now the most formidable force in American politics. It is imperative to understand how this happened and is happening."

The rest of his article is worth reading, particularly regarding George Orwell, but foremost, note my qualifying comment as follows:

Whether or not Trump is crazy or stupid (or both) is not the question.
Truly, critically, the first thing to understand is that Donald Trump is a monstrously twisted, sociopathic psychopath.

His self-called genius at dominating the so-called news is not so much his doing as the consequence of corporate control of 90% of U.S. media.
And those corporations care absolutely nothing about journalism.
For them it is only and all about money.
They are driven by their greed for as much as they can get by any means, and to hell with the consequences, which is exactly what that will bring.

Trump is in loose cahoots with the real powers that be, and he is merely the carnival barker they amorally enable and obscenely profit by.
However screamingly necessary, expunging the repulsively toxic Trump will not be sufficient.
What must be totally obliterated is everything that has systemically produced and sustained him.

https://www.politico.com/blogs/on-media/2016/02/les-moonves-trump-cbs-220001
02/29/2016
Donald Trump’s candidacy might not be making America great, CBS Chairman Les Moonves said Monday, but it’s great for his company.
"It may not be good for America, but it's damn good for CBS," Moonves said at the Morgan Stanley Technology, Media & Telecom Conference in San Francisco, according to The Hollywood Reporter — perfectly distilling what media critics have long suspected was motivating the round-the-clock coverage of Trump's presidential bid.
"Most of the ads are not about issues. They're sort of like the debates," Moonves said, noting, "[t]here's a lot of money in the marketplace.”
The 2016 campaign is a "circus," he remarked, but "Donald's place in this election is a good thing.”
"Man, who would have expected the ride we're all having right now? ... The money's rolling in and this is fun," Moonves went on. "I've never seen anything like this, and this going to be a very good year for us. Sorry. It's a terrible thing to say. But, bring it on, Donald. Keep going.”

That is a great video. The soloist bears a remarkable resemblance to, and the enthusiasm of, a former massage therapist who regularly pulverized me into near insensibility without mercy. She advanced into physical therapy and left me, and others, bereft.

I had just finished reading an interpretation of Buffet's latest comments on the market in the NYTimes. Dismal, but unfortunately accurate, I think.

They're a thoroughly miserable bunch.

But thanks for the video!


Last week Chuck Collins (Institute for Policy Studies) linked up to a report on May Day (and beyond) rent strikes.

"The strike, described as the largest coordinated tenant action in nearly a century, came as state and federal lawmakers face growing pressure to cancel rent and mortgage payments for the duration of the Covid-19 crisis, which has thrown more than 30 million people out of work."