Set Your Alarms For the Woke Liberal Rich

When they've lived in their comatose bubbles for so long, dreamily esconced in the belief that if only they gave money to the Democrats and partied with the Obamas, even occasionally getting arrested for chaining themselves to the White House fence to protest Trumpism and climate change and world hunger, we can perhaps understand the tone-deaf grogginess with which they have addressed the Great Uprising of the Unwashed. For too long, the rich and famous have been the centers of public attention and the designated actors of Resistance, Inc. whose main theme had been the horrendous Russian Attack On Our Democracy.

It's bad enough that the public has reacted with such derision to their self-pitying quarantine live-streams from their luxury estates and their staged Kente cloth fashion photo sessions.

Media heartthrob Chris Cuomo, for example, is so over. From his nightly CNN shows chronicling his own well-insured, concierge medicine battle with Covid-19 and his brotherly antics with similarly exhibitionist Governor Andrew of nipple ring fame, he has now been reduced to flashing. His discreetly shaded naked ass cavorting in his Hamptons backyard was "accidentally" filmed by his wife during a yoga class live-stream. But the stunt barely registered, thanks to media coverage being diverted to so many lesser mortals getting killed and tear-gassed and beaten by cops on the streets of America.

If you can't beat the beaten, then you might as well join them. But you can't really join them, because you're quarantined at your country estates or on your yachts. So the next best thing is to "stand with" them in theatrical cross-class solidarity.

Instead of joining calls to dismantle and defund America's militarized police, you donate a very, very tiny portion of your untaxed fortunes to a very few carefully select and temporarily prominent victims of state-sanctioned violence.

Barbra Streisand, who is still living in California despite her anguished vow to leave the country when Donald Trump was elected in 2016, ostentatiously rewarded the six-year-old orphaned daughter of George Floyd with some pricey Disney stock. It certainly beat Streisand demanding that her vast fortune be taxed at Eisenhower levels to guarantee that class sizes in newly built public schools are small enough so that children like Gianna can actually learn.


“Thank You @barbrastreisand for my package, I am now a Disney Stockholder thanks to you,” Gianna wrote.
Representatives for Streisand confirmed to the Guardian that she had sent Floyd the shares, as well as videos of two television specials, 1965’s My Name is Barbra and Color Me Barbra (1966).
“I sent Gianna videos where I played a little girl in my first television special,” said Streisand, “singing kid songs, and my second special – a sequence with lots of baby animals.”

If you or a relative becomes the unfortunate collateral damage of weaponized capitalism and you are very, very lucky, then the system might even reward and co-opt you. The sociopathic politician who has been the main force behind the national brutal police and prison state for the last half-century will even graciously use you as a prop to advance his own stale campaign for the US presidency. 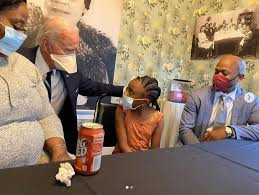 If you are very extremely lucky, you might even  get invited to appear at this summer's Democratic nominating convention as a poster child of Biden's new, improved, reformed Community Policing initiative. Maybe the armored tanks he furnished to small-town departments can now come equipped with Teddy Bears and cartons of milk bearing pictures of missing and exploited children - both to drink and to wash away the pepper spray-induced tears.

It is currently unknown whether any woke celebrity or politician has yet stood up, stood with, genuflected to or leaned in to give cash or stock shares to the seven-year-old Seattle boy who was maced by a cop during a street protest a few days ago. 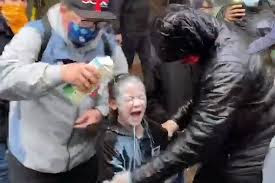 It is also unknown whether any plutocrat has gotten off his or her well-photographed knees long enough to send stock portfolios to the man arrested for posting the video. The cameraman apparently matched the description of a suspect who had allegedly pointed a laser (not a taser) in a different police officer's eye, The ocular pain this caused apparently vied in intensity with the pain suffered by the little maced boy, whose assailant had yet not been arrested pending an internal investigation by his peers and complicit bosses.

The rich, meanwhile, will always find a way to cash in on the pain of the poor. Otherwise they couldn't stay rich for very long.

The New York Times, which in its own newfound wokeness finally got rid of the centrist op-ed chief who commissioned and then posted a white supremacist screed by Senator Tom Cotton without even reading it, still strives mightily to frame the narrative to plutocratic ends, regarding both the pandemic and the protests.

Fashion editor Vanessa Friedman approvingly writes of the "respectable" Black fashionistas at the protests and the importance of demonstrators decking themselves out in their Sunday best as a symbol of resistance and to remind the rowdier elements that their first duty is to vote for Democrats like Joe Biden. While acknowledging that the Democrats' Kente cloth debacle fell flat, Friedman still insists that "the impulse (of the stunt) was clearly genuine."

The wealthy Democratic women wearing white suits of solidarity in defiance of Donald Trump were much more fashionably effective, ranking right up there with the  Sans Culottes and the Yellow Vests of France, she actually claims.

Friedman's point, if indeed she has one, is that you are less likely to be accused of Antifa or socialistic tendencies if you dress in expensively tailored designer couture while protesting against inequality and oppression. Sadly, it appears that the half-life of her class-enhanced Ambien is seriously interfering with her wokeness.

On a similar note, the Times celebrates consumerism as an antidote to the pandemic. Retail sales were up 17 percent in May and "Wall Street" jumped for joy as though it were a real person and not a corrupt gambling casino kept artificially alive with Federal Reserve blood transfusions while the poor and uninsured and black and brown people are still dying of the plague in disproportionate numbers.

From the Times article:


Driving some of the sales gains was warm weather, a sense of relief after weeks cooped up at home and optimism from some that the worst of the pandemic could be over. But they were also lifted by stimulus money — totaling $1,200 per recipient, plus $500 per child — that will run out in the coming months, with no indications that Congress intends to pass another round of assistance.

It looks as though the Times is still not quite as woke as it pretends to be. It is only after dutifully and uncritically reporting that "some" think that the pandemic is history (it is only just beginning) and that people are just so relieved that the warm weather has finally set them free to buy more stuff, that the piece mentions there is also the fear in high concerned places that those bounteous $1,200 stimulus checks will start running out in the coming months.

Um - the vast majority of recipients spent their checks on overdue rent, utilities and milk for the kids the minute they arrived in their bank accounts. Many people never have received the money at all. People in the bottom 90 or so percent are neither saving the money nor blowing it on retail bling.

Most especially, they are not spending it on acceptable protest fashion.
Posted by Karen Garcia at 11:52 AM

Anyone seen today's publicity piece at Fox "News" re Elon Musk and his "grimy" girlfriend, and fake-tatted child? Yes, I know, more of the distraction that mass media is so prolific at churning out. But the distraction of politicians and celebrities taking a knee (rather than doing anything to really remedy injustice, inequality, and police abuse of power) doesn't really have that much long-term "distractability", so time to get back to the lives of the rich and famous:

Yep, there's nothing more classy (costume ball or no costume ball) than being/having a girlfriend who dresses like what (I imagine) a Goth hooker looks like.

Perhaps you can read Luke to them.


After long spells of ignoring commoners living their boring lives, celebrities get woke and take to slumming. Really awful social stuff forces the well-off to emerge from gated plenty to bestow blessings in the direction of those who live in or near the gutter. Instead of furs this time around celebrities are coming out in summer whites and such like to sprinkle words and coins upon the great unwashed. Mostly words.

In this pandemic Good Medicine is overruled by Big Business. The market trumps health and pressures authorities to open up locales where money changes hands in volume. As Karen said, the plague ain't over, it's just beginning. Why aren't we continuing with testing, contact tracing, confinement and treatment without charge? Those steps are the only way to protect everyone.

In Florida, Texas and Arizona, even though record highs of two to three thousand people per day are testing positive with Covid-19, authorities intend to continue loosening rules for social distancing and authorizing the reopening of more businesses. Almost 20 of the 50 states are doing the same after a brief confinement accomplishing next to nothing and skipping the essential follow-up of contact tracing.
https://www.nytimes.com/2020/06/16/world/coronavirus-live-updates.html?campaign_id=60&emc=edit_na_20200616&instance_id=0&nl=breaking-news&ref=headline&regi_id=48169905&segment_id=31090&user_id=080735a79f9c39779f392d51a8dab7d6

Scientists warn that the second wave of a plague can kill more than the first. What's taking place without resorting to the term is a final solution through Herd Immunity (HI). Make America lean and mean again (MAMALA). HI MAMALA. Seniors and the weak of all ages, who had been allowed to live longer thanks to direct state aid, will henceforth be culled by the virus, not austerians or cops who crush windpipes with a knee. Great savings ahead for Social Security, Medicare and Medicaid.

Great idea, Joker: let our betters hear Luke once again, specifically Luke 16:19-31. The parable is calculated to set off alarm bells in those who can still hear the insistent whispers of conscience.

I find the choice of politicians more incredibly depressing than in the last election cycle. I mean - BIDEN - They really couldn't come up with anyone better than HIM? The DNC is relying wholly on the TLOTE meme.

Already, we hear almost nothing of the protests in Australia - and Facebook - which I actually made use of for the first time EVER over the protests - is back to its trivial posts (The main reason I NEVER look at it.) Important news is so easily forgotten.

No wonder we have the government we have.

"How Target, Google, Bank of America and Microsoft quietly fund police through private donations.
More than 25 large corporations in the past three years have contributed funding to private police foundations, new report says."


"Corporations Are Bankrolling US Police Foundations Without Public Oversight."