Biden Will Fight For Your Right To Be Exploited

If you didn't watch Joe Biden's long-awaited and long-winded press conference this week, relying instead on the big  "takeaways" reported by the mainstream press, then you might be under the impression that the only news the old codger made was the commission of yet another faux pas.  Biden admitted he won't start a war with Russia if Vladimir Putin merely makes an "incursion" into Ukraine. Biden would tolerate him merely playing pinko toesies under the table with the US client state, but anything beyond first base, like full penetration? Forget about it!

So many official Washington heads proceeded to explode at the mere prospect of an utter failure of war in our time that Biden was forced to quickly backtrack. Even a minor overstepping of the boundaries of propriety by Putin will now result in Biden donning the requisite suit of shining US armor to defend global democracy as it is defined by the capitalist elites. He will impose upon Russian citizens, hundreds of millions of them, draconian economic sanctions  such as the world has never seen. And given that sanctions against innocent bystanders, as a sociopathic means of punishing and weakening their rulers, often includes starvation, disease, and freezing or sweltering to death - essentially, genocide by deprivation - sanctions can actually do more harm to humans than guns, bombs and ground wars can.

It was Secretary of State Madeline Albright, remember, who looked back so fondly at Clinton-era U.N. economic sanctions against Saddam Hussein's Iraq and grimly boasted on "60 Minutes" that the resulting deaths of half a million children had absolutely been "worth it."

Fast forward to 2022 and poor Joe Biden has found himself once again the awkward position of having to defend his own sanity and cognitive state for the "gaffe" of not being threatening enough to Russia on live TV. He already has had to atone for so prematurely withdrawing from Afghanistan after a 20-year war and occupation via  issuing lethal sanctions against the Taliban and thus exposing innocent Afghans to more hardship. It is essentially trading one form of torture and abuse for another.

Biden, like every president before him, is being forced to prove his bellicosity and mental functioning and hegemonic IQ at every turn. The only way American presidents can prove themselves worthy and strong, in fact, is how many bombs they can drop and how much misery they can foment throughout the world. Violence is the one surefire way to engender respect from their financial backers at home, as well as the fear and loathing from much of the rest of the world. Admiration, not so much.

When critics from both parties and the corporate media openly chat about Biden being cognitively impaired, it is mostly limited to what they view as his global power stumbles.

He did, in fact, offer full and convincing proof of his truly dangerous and  longstanding delusional state at his press conference, not about his war skills abroad, but when he opined that he has actually over-performed on the domestic front. The trouble is, he smirked, Americans just don't realize how great things are, or at least that the bad things are getting better. His real disease is mental capture by the cult of neoliberal capitalism and the use of a nostrum restricted to some good hard gaslighting messaging to his allegedly befuddled constituents.

Or, as Biden strove to explain his overachievement problem to a reporter: 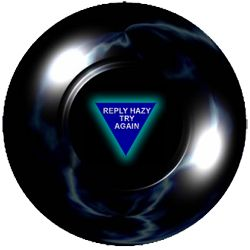 He rephrased his follow-up answer by comparing his assigned task to the epic achievement of finally getting at least some of the dolts to understand the 2,000-page kludge known as the Affordable Care Act, or Obamacare, For the sake of placating the press corps, if not educating the masses out there in TV Land, Biden tried to finesse it even more:

You know, one of the things that I remember — and I’ll end this with — I was talking with, you know, Jim Clyburn, who was a great help to me in the campaign in South Carolina.  And Jim said — and when he would endorse me — and there was a clip on television the last couple days of Jim.  And it said that we want to make things accessible and affordable for all Americans.  That’s healthcare, that’s education, that’s prescription drugs, that’s making sure you have access — access to all the things that everybody else has.  We can afford to do that.  We can’t afford not to do it.

All together now, Proles:

What do we want?

When do we want it?

When it comes to neoliberal dogma, Joe Biden's mind is absolutely functional and absolutely clear. The myelin sheaths guarding the nerve fibers of his cerebral cortex are fully protective of the ageless market-based notion, for example, that "health care" doesn't actually mean guaranteed, free-at-the-point-of-service health care. It only means that you have an absolute right to travel freely from your home to any hospital emergency room. You will then be guaranteed physical access to its doors and to whatever treatment regimen that your junk insurance product will deign to pay for, or whatever assets you have to relinquish in medical bankruptcy court. Ditto for education. Anybody is free to apply to any school. It's the getting in and paying the price of tuition and future onerous education debt that's another story. You have access to the same dreams that rich people have access to. Everybody sleeps, after all. You are absolutely free to window-shop till you drop and gaze longingly from afar at the promised land of health and security. If you work hard, you are free to gain as much access as "everybody else." Access is all on you, the individual.

"So, I tell my Republican friends," Biden went on, "here I come. This is going to be about what are you for” —what are you for'  — and lay out what we’re for."

It's the Accessibility and the Affordability, stupid!

It's also about the divided government of oligarchs being one great big happy family that pretends to be dysfunctional to keep us all in suspense. War and surveillance are the great unifiers.  I don't see, for example, any outrage or aghastitude by corporate media accounts of the presser about this particular Bidean "gaffe" -

I think the report card is going to look pretty good, if that’s where we’re at.  But look, the idea that — Mitch has been very clear he’s going to do anything to prevent Biden from being a success. And I get on with Mitch.  I actually like Mitch McConnell.  We like one another.  But he has one straightforward objective: make sure that there’s nothing I do that makes me look good in the mind — in his mind with the public at large.  And that’s okay.  I’m a big boy.  I’ve been here before. 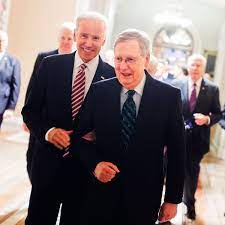 That admission makes his Ukraine gaffe pale in comparison. Upton Sinclair was right. The two permissible party cults in the United States are the two right wings of one bird of prey. Biden knows it's all a game and Mitch knows it's all a game, and media pundits know it's a game. They and their corporate conglomerates invest in and profit by culture wars and identity politics, taking a side and suckering in all the pawns that they can crowd onto their game boards, till one falls off to make room for the next one.

Judging from the millions of un-pawned people up and quitting their jobs or going on strike, and students walking out of classrooms in protest of sloppy Covid protocols, and tenants taking to the streets against greedy corporate landlords, the days that the likes of Biden and McConnell could count on the Dupes of the Duopoly may turn out to be just figments of whatever it is that passes for their imaginations.

That dangling carrot will soon be replaced with a non-fungible token.

“The law, in its majestic equality, forbids rich and poor alike to sleep under bridges, to beg in the streets, and to steal their bread.”

We have two ugly realities facing us:

1. The United States is shopping for a war to replace Afghanistan. Yemen is not big enough. We've been hesitant about Iran. But Putin is offering the U.S. the opportunity we've been waiting for. I wonder how often (not "if") the Chinese have considered a deal with Russia to simultaneously invade Ukraine and Taiwan?

2. Biden has an outright minority in the Senate, given that Manchin and Sinema are DINOs. And that minority will shrink further after the 2022 elections.

So my most optimistic outlook is a three year lull with Biden before the GOP takes over in 2024 and the country goes full authoritarian. I'd be glad to say in 2026 that I was wrong, if I'm still here!

I expect the Democrats to lose fairly big in the Midterms and for the Congress to flip. And then - like Obama - he will wring his hands and be off the hook because Congress knocked down all the good legislation he really wanted to do. It will be the fault of the Republican Congress, not the DNC who put a patsy into the White House in order to serve their corporate overlords.

“I think that American politics at this point is corrupt. What we have is a system of legalized bribery."
~ Molly Ivins

Corruption Is America’s Operating System —
https://whowhatwhy.org/podcast/corruption-is-americas-operating-system/
01/28/22 ~ Jby eff Schechtman
"Our guest on this week’s WhoWhatWhy podcast, historian and journalist Sarah Chayes, argues that we can’t fix our floundering democracy until we face — and fix — our current levels of corruption.

"In her view, we are in a “pandemic of corruption,” fostered by a network of corrupt businesses and political leaders worldwide. Before we can begin to set things right, however, we first have to grasp what modern-day corruption really is.

"Behind this evolving crisis, says Chayes, is a shift in the very definition of power. Where society’s leaders once at least paid lip service to the concept of public service, today the only measure of social status, she contends, is money: The pursuit of power has turned into a no-holds-barred scramble for more and more wealth.

"Chayes explains how we got here, and how we must build a coalition of integrity that transcends ideology, one that has its roots in equity and the public interest."