A Blob Divided Against Itself Can Only Replicate

The US foreign policy establishment, often described as The Blob by Washington insiders, was suffering a rare attack of indigestion last week. It seems that the reach of a few of its slimy tentacles had exceeded their grasp. So replete was the Blob upon the gourmet feast known as Ukraine, so giddy was it from the bubbly champagne of public approval for its propaganda campaign to effectively transform Ukraine into an emotionally appealing 51st state, that it forgot that bragging too much about bloodthirsty gluttony does have consequences. It makes people queasy just having to listen to it spewing its gastronomic excess.

Some supposedly renegade individual replicants ventured out from the Blob Proper last week and dished to the New York Times  that it was the Blob itself which had steered its Ukrainian proxy fighters toward some soon-to-be assassinated Russian generals. It was the Blob itself which had targeted the location of the flagship of the Russian fleet for its blowing-up by same proxy fighting force.

This ill-advised chest-thumping, this direct provocation of a fellow nuclear power, was so over the top that it even prodded the latest designated nucleus of the Blob - President Joe Biden himself - into dishing to New York Times columnist Thomas Friedman that he would not tolerate any of his tentacles ever going rogue in such an unseemly manner, ever again. He apparently even used the F word or worse while  threatening to hunt them down. But this is so moot, because cutting them off will only make them stronger. Slime molds of such superior quality can easily regenerate themselves. Just as the Washington war/security establishment has long used fellow Blobster Friedman to sell its wars of aggression and related regime changes for the benefit of American capitalism  so too does it now use Friedman as journalistic damage control.  Friedman is the ultra-soft washcloth to gently but firmly dab away the blood from Biden's hands, in the process also disguising the fact that these expensively manicured hands are really the giant tentacles of one great big engorged slime mold. 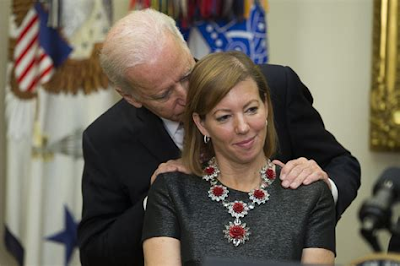 After Friedman ludicrously praises Times reporters for their intrepid digging for spoon-fed goodies from their government partners, he writes:

At the same time, from everything I have been able to glean from senior U.S. officials, who spoke to me on condition of anonymity, the leaks were not part of any thought-out strategy, and President Biden was livid about them. I’m told that he called the director of national intelligence, the director of the C.I.A. and the secretary of defense to make clear in the strongest and most colorful language that this kind of loose talk is reckless and has got to stop immediately — before we end up in an unintended war with Russia.

This is the same president, mind you, whose own notion of diplomacy  for the prevention of nuclear destruction of the whole world is the reckless goading of Vladimir Putin, calling him a war criminal and a genocidal maniac who must be removed from power. The very idea that Biden is even remotely upset about the unseemly chest-thumping by the lesser tentacles in his administration is therefore laughable on its face.

Even so, this is the delicate stage in the US war on Russia where sympathy for everyday Ukrainians must be maintained at a fever pitch so that the American public will not rebel once the Blob takes an even more direct role in the war. It was only a few weeks ago that independent critics of the proxy war were being dismissed as Kremlin stooges, when they pointed out the factual truth that there is a proxy war going on here.

But as quick as a slime mold replicates in the woods, the official narrative now acknowledges that this is indeed a proxy war - but only because Biden and the Blob have been "dragged into" one by the evil Putin. It is still a heresy to place the actual beginning of this war against Russia to 2014, when the Obama administration orchestrated regime change in Ukraine.

The Blob (which very much includes the corporate media in its body) is still selling the narrative that the war had its beginning with Putin's own invasion of Ukraine, that it has occurred in a vacuum, and that the incursion of NATO up to Russia's own border in defiance of an agreement made in the 1990s not to do so has nothing to do with it, that the Minsk Accord calling for a diplomatic solution to territorial disputes around eastern Ukraine were never ignored by the "West," that Biden's  economic sanctions, pre-Putin invasion, to make ordinary Russians suffer were a provocation if not an act of war itself.

As much as US political leaders pretend to bemoan the "divisiveness" of the domestic culture wars, which they've played such an integral in promoting for much profit to their corporate sponsors, they also love to pretend that their periodic internal agonizing and spirited debates are proof of a healthy functioning democracy. They pretend that they're wringing their hands over the tragedy of a war they had no part in creating. What they're really doing is flailing their slimy tentacles like whips, striving to manufacture our consent for yet another endless war.  And this particular war may well live up to the 1914 hype of being the "war to end all wars" - but only because the use of nuclear weapons will ensure that never again will humans be able to fight another war, let alone win one.

To hear Friedman tell it, the Blob is naught but a hapless collection of iron filings being inexorably drawn into the maw of a Blob with an irresistible magnetism in its own tentacles.

"The staggering takeaway from these leaks is that they suggest we are no longer in an indirect war with Russia but rather are edging toward a direct war — and no one has prepared the American people or Congress for that," Friedman disingenuously writes.

Well, consider yourselves gently prepared if you haven't been paying attention up till now.  As for Congress, their unquestioning appropriation of tens of billions of dollars to enrich the weapons industry, in the space of only a few months, for waging the "proxy war" has already implicated them in full knowledge of what they do. The so-called progressive caucus in the lower House apparently never dreamed of leveraging its own bellicose vote in order to force passage of the social welfare programs and Covid relief bills currently stalled in the Senate. People can suffer indefinitely, but war is always time-sensitive. At least that's what Speaker Nancy Pelosi grotesquely implied.

The view of Biden and his team, according to my reporting," Friedman concludes, "is that America needs to help Ukraine restore its sovereignty and beat the Russians back — but not let Ukraine turn itself into an American protectorate on the border of Russia. We need to stay laser-focused on what is our national interest and not stray in ways that lead to exposures and risks we don’t want."

Um... Ukraine has been a protectorate, or at least a beholden client state, of the US at least since 2014. Much of its own mainstream media is directly funded by NATO and USAID, which themselves are funded by weapons manufacturers and oil companies.

Until Ukrainians were fetishized by the Blob as worthy freedom fighters and trendy cultural icons even deserving of a Bono concert, Joe Biden displayed his true colors. As vice president, he traveled to Ukraine and informed them they'd have their pensions reduced, their retirement ages raised, their costs for fuel increased -  in a country where the average salary is $775 a month - as IMF punishment for official corruption. This is while his son Hunter was making tens of millions of dollars sitting on the board of a corrupt Ukrainian gas company.

Another fun fact about slime molds is that they pride themselves on their diversity. Even in nature, they come in every color except green. So it's only natural that the Washington variety of the Blob is so adverse to a green new deal, not least because the military is the biggest fossil fuel polluter in the entire world.

For a creature lacking a brain, the slime mold that inspired "The Blob" movie that in turn inspired the folksy moniker for what used to be called the Military-Industrial Complex, it is marvelously efficient at finding food, traveling ridiculous distances, and of course, constantly evolving and shifting its shape and replicating itself and growing without limit almost at the speed of light. As one scientist so vividly put it in a PBS News Hour segment about the species,

They form strange and sophisticated shapes – some resemble honeycomb lattices, others blackberries. And then there’s the slime mold known as “dog vomit,” because it looks just like the stuff. Some remain microscopic, and others grow rogue, forming bulbous masses, as long as 10 to 13 feet. Yet humans largely ignore them.

“Very few have been consumed as food. You can’t build a house with them. They escape our noses most of the time,” (Professor Steve) Stephenson said.

Slime mold is a lot like war -  what is it good for? 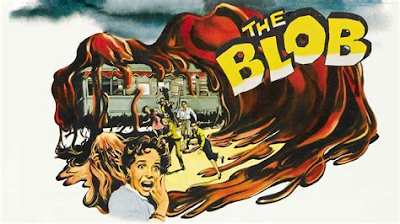 What would it take for realism to take back control from the "Unipolar Moment" Blob?

Detonation of a nuke might do it. Sputnik and the Russian nuke tests played a big role in dialing back US arrogance in the 1950's, so there is precedent.

But where might it go off? In Ukraine? In European borders? On USN ships at sea? On US territory? (There are attacks being made inside Russia's territory, so they may not think that is a line anymore).

Or maybe it would not work. Even that would just be excuse to up the warmongering to new levels ("Remember the Maine!" -- that was a lie).

Where would it need to go off to have the effect of disabling The Blob? Some places would not have enough impact (so who really cares about Ukraine? -- not The Blob that uses it as victim), and perhaps some too much (Remember Pearl Harbor!).

I think perhaps some major re-supply point just inside Ukraine on the NATO border, a crossing point. But that is a guess.

We are far down to road to nothing can stop us now, "We want War" and our own are going to do it to us.

While I'm a pessimist, I try not to be an alarmist. But we are in real danger of nuclear Armageddon over Ukraine and may never get to the wished for future war with China.

Earlier today I Googled where the U.S. stores nuclear weapons in Europe. You don't want to know.

in the movie, the blob is stopped from its relentless phagocytizing of humans by blasting it with CO2 fire extinguishers. As it turned out, the creature couldn't stand the cold. Ultimately it was airlifted to the Arctic deep freeze.

With global warming and melting polar caps, it does not look good for humans this time around.

THE CHRIS HEDGES REPORT: UKRAINE AND THE RESURGENCE OF AMERICAN MILITARISM
What will be the consequences of the United States’s commitment to long-term conflict, and where will we be when the war finally ends?
https://therealnews.com/the-chris-hedges-report-ukraine-and-the-resurgence-of-american-militarism
May 13, 2022 ~ by Chris Hedges

"The war in Ukraine, stoked in part by NATO expansion and the violation of promises made to Moscow at the end of the Cold War, now looks set to become a lengthy war of attrition—one funded and backed by the United States. What will be the consequences of the United States’s commitment to long-term conflict, and where will we be when the war finally ends?

"Andrew Bacevich explains in this interview how the end of the Cold War triggered a new bout of American military interventionism that has now spanned decades. Moreover, as Bacevich argues, if the fighting in Ukraine ceases without a geopolitical plan for peaceably bringing Russia back into the community of nations, we risk setting the world stage for even greater conflict."