In the spirit of austerity, and with memories of the Sequester and shut-downs still fresh in their craven little minds, the ruling establishment has now decreed that human beings as well as the programs that help human beings must now be quarantined in the interests of Homeland Security.

Whether the possibly unconstitutional sequester of people against their will is humane (Democrats' house arrest) or inhumane (Republicans' unheated tents in late October) is a matter of fevered debate.

New Jersey Governor Chris Christie, who never met a public employee or teacher he didn't hate, has actually imprisoned a nurse in a tent outside a hospital on grounds that her humanitarian spirit might possibly spread to others. (She has tested negative for Ebola.) In a just world, it would be the corrupt and corpulent Christie who'd be placed under perpetual quarantine.... in a super-max prison somewhere, with no possibility of parole, for crimes ranging from "BridgeGate" to his illegal halfway house scam to pay-to-play as a governing ideology.

(Update: the New York Times now reports that he will release Kaci Hickox, who lawyered up, from tent prison -- if the CDC approves. This way, he can cover his own ample ass should she later develop the disease, which is what he is probably really, really hoping happens. He is that much of a dick.)

New York Governor Andrew Cuomo hasn't been much better, boomeranging around the political spectrum all weekend from Far Right A (Christie) to Plain Right B (the Obama administration) in a frenzied quest to appear competent as he, too, has barely escaped prosecution for corruption.


Let's hope, meanwhile, that Ebola doesn't strike in Detroit, which on the banana republic scale  now ranks pretty close to Liberia, where the virus is out of control. Since thousands of Detroit residents have had the basic human right of water snatched away from them for lack of ability to pay, even such basic sanitation niceties as hand-washing and toilet-flushing have become luxuries out of their reach. It has gotten so bad that the United Nations visited the Motor City to condemn the fact that the gulf between rich and poor in the United States has widened to alarming and inhumane and dangerous proportions.

It's actually pretty amazing that President Obama will have the chutzpah to visit Detroit next week to "stump" for the same Democrats who have remained stonily silent on the plutocratic pillaging and ethnic cleansing of that once-great city. But I wouldn't be surprised if he manages to fit in another photo-op with the latest celebrity Ebola recoveree first, to hand out the sterile air kisses as a prelude to the next blast of hot air. Projectile political speech, as we should know by now, is as hazardous to our health as any microbe.

Here's what Obama should do: grab his pen and sign an executive order providing for five-star hotel accomodations for all returning symptom-free Africa aid workers under quarantine order, and a promise of a life-long government job in the field of their choice, followed by awarding of the Medal of Freedom and a ticker-tape parade.

In his latest "blame the Republicans and give the Democrats a pass" column today, Paul Krugman bemoans lack of investment in public infrastructure and how "America has turned its back on its own history."

Umm... it's the plutocracy, stupid. A gridlocked government with two undemocratic parties running the joint is just a propaganda ploy to get us to pick a team and pretend we're all participants in a battle royale between the forces of good and evil. Maybe after the midterms, Krugman will turn his attention to actual issues affecting ordinary people. But I am not holding my breath. Anyway, here's my published comment:

For the government to invest in infrastructure, there first has to be a commitment to the commons. And the super-rich hate to make commitments outside of their own class.

In the global economy, there is no such thing as patriotism. Multinationals locate their headquarters and trillions in excess cash to international tax havens Or, if they're feeling especially benevolent, to the states that will pave their private parking lots for free and spend public money to train the low-wage labor corps of the future. (The promised jobs are never for right now.)

Public works projects require well-paid, unionized jobs. Since one of the main objectives of the oligarchy is to destroy unions, squeeze labor, and thereby depress wages, even the ability to borrow at zero interest is not in their best interest and not in line with their goal of total global feudalism. What do the Koch and Walton dynasties care about potholes and crumbling schools? They've got their Lear jets, helicopters, private tutors and armed security forces.

They are corporate parasites who aren't satisfied with sucking the last meager drops of blood, wealth and toil from the public. They're even taking out life insurance policies on The Help, with themselves as sole beneficiaries.

As Downton's Dowager once observed, "Nothing exceeds like excess."

And the serfs are getting restless... and mad as hell. 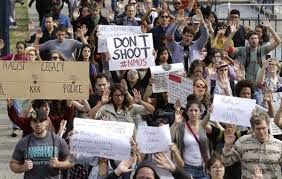 Karen, I greatly enjoyed your expressed contempt for all the craven mindlessness of our feckless politicians being tough on Ebola.

Feckless conservative bloggers, having discovered that Kaci Hickox is a registered Democrat, are attacking her: “Drama Queen is a CDC operative/Democrat political activist. They'll do anything to turn Ebola into an election year advantage.”

As are many in comments across the internet. What is wrong with people!!!!

Maybe we should put them and our politicians in quarantine. They are a far bigger threat than ebola.

Thanks, Denis and for posting the link to Kaci's op-ed. Luckily she is not a native Jerseyite and so should be relatively safe from the wrath of Chris Christie.

It took Ebola to rip the mask right off the for-profit health care system and the facade of competence from our huckster politicians.

Great Comment on Krugie, Karen. I have had a few conversations with Democrats I haven't spoken to in some time and couldn't believe their mantra was still to blame the Republicans for everything that is wrong with the U.S.

Denis, thanks for the link. I started reading the comments and was appalled at the ignorance and lack of compassion for a woman who has literally put her life on the line to help others. I was so ticked off I even linked into Facebook to leave a few comments of my own in response but had to leave the site . . . far too much negative energy on my part as well as theirs.

The whole thing is surreal. What a convenient distraction and crisis to distract us from what the real culprits are doing to the 99 percent.

One more thing. Karen, your comment on Krugie was a breath of fresh air. Admittedly, I didn't get very far into the comment section before giving up but I couldn't believe how little dissent their was to Krugie's assumptions. Mostly just comments slavishly agreeing with PK that if only the Republicans would play ball with Obama, we could get this economy rolling by golly!

Sadly, a significant number of his easily duped readers, seduced by the words of Dr. Pangloss, continue to believe that Krugman is a “liberal.”

It is a deliberately cultivated form of stupidity.

“The human eye is a wonderful device. With a little effort, it can fail to see even the most glaring injustice.” — Quellcrist Falconer