Biden Can Hide But He Can't Run

Status Quo Ante Uncle Joe's campaign has made the mistake of letting one pool reporter cover each of his big-dollar fundraisers in the interests of fairness and transparency.

On Monday night, Biden reportedly reassured a group of wealthy donors and lobbyists that he thinks quite well of the oligarchs whose interests they (and he) represent.


"Wall Street and significant bankers and people, they're all positive, they can be positive influences in the country. But they didn't build the country. The middle class built the country."

As for the Republican senators now so mysteriously in the thrall of Svengali Trump, Biden is cheerfully sanguine. Since he is essentially one of them, he is confident that he can jolt them out of their Trump hypnosis once he's back on the scene. Then they can relive the good old pre-Trump days of sedate racism, misogyny and generalized class war antics. All it will take, given that Biden has scrupulously avoided speaking to both the media and ordinary voters, is for the Democratic super-delegates to nominate him by acclaim at a brokered convention. Before that happens, though, the corporate media and his fellow candidates must be pressured into not attacking his debate performances as viciously as they will probably deserve to be attacked.

Meanwhile, Biden runs away from accountability, hiding behind closed doors as he dog-whistles to the Market:


"Here's the deal: we all know, and I don't think this is hyperbole, we all know in our gut this election is the most important election we've ever engaged in—and not just because I'm running," Biden said. "With Trump gone you're going to begin to see things change. Because these folks (his GOP pals) know better. They know this isn't what they're supposed to be doing."

Biden should just cut to the chase and admit that he's the candidate of the TINA (There Is No Alternative) Party. That acronym comes to us direct from the late British P.M. Margaret Thatcher, and it means that there is no alternative to cutthroat capitalism and a Hobbesian war of all against all.

That is why Biden and other "New Democrat" centrists of his ilk love to point to Trump as the only enemy that regular people should ever need to fight. It's better for the corporate wing of the party to sound the warning that Trump is the next Hitler who threatens to abolish democracy, cancel the election if he doesn't win, take over TV stations and newspapers, and send storm troopers into the streets to arrest well-heeled liberal #Resistance, Inc. freedom fighters. Oh, and threaten US standing in the world, as if increasing death rates in the US, crushing education debt, homelessness, police violence, gun violence and relentless coup attempts and bipartisan bombings abroad were not pre-existing reputation-killers enough.

We're instructed that it is up to political content-consumers ("we the people") to defeat Trump by electing a kinder, gentler, more discreet monster to regress the misery to those halcyon days of slow frog-boilings, in hopes that enough people will notice their pain less in the future than they are noticing it right now.

To give you another example of how tainted Biden truly is, when I Googled "A.P. pool report" in hopes of getting a verbatim transcript of his Monday night remarks, what actually popped up on the front page were myriad reports of Biden's penchant for swimming naked in his pool in front of female Secret Service agents.

If that isn't bad enough, my search for the Biden pool report on the latest fundraiser also brought up the attempt in 2012 by his operatives to "edit" press accounts of his campaign appearances. This attempted censorship was on top of a separate controversial Obama White House directive to journalists to submit their stories for "quote approval" prior to publication. It was also on top of the the Obama administration's record war on whistleblowers and its spying on journalists.

So Trump's much-criticized verbal assault on the media as "enemy of the people" is not so much an anomaly as it is a direct extension of the no less frightening media suppression of free speech as practiced by the previous administration.

Biden is acting more like Candidate Hillary Clinton every day, hiding from the media as he sends out his various underlings to explain his unconvincing flip-flop over his Hyde Amendment support, to name just one recent controversy. You might remember that Hillary's campaign literally corralled the press behind ropes at public events in order to lessen the chances of them actually popping a non-scripted question at her.

It is getting so desperately pathetic on the invisible Biden trail that his campaign actually tweeted out a picture of his special friendship bracelet memorializing his insipid good-buddy bond with Barack Obama. This image should make everybody just shut up and swoon, right? (Rather than, say, cackle or vomit.) 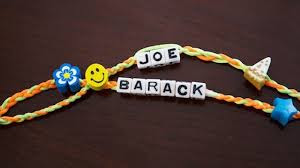 Biden is not your normal phony candidate. He is an unabashed high-level factotum for the financialized economy, and a craven one at that. He tries to hide his naked history by ineptly draping himself with myriad spokeswomen and the first black president (who probably picked him as his running mate only to reassure conservative white voters that the first black conservative president didn't pose a threat to them.)

Biden keeps insisting that Trump is an anomaly who burst forth from the ether. He ignores the truth that the past four decades of transnational, labor-destroying, deregulated market neoliberalism - increased riches for the wealthy and increased poverty for everyone else - is the Petri dish that nourished Trump. And Biden himself provided a lot of those nutrients, what with his racist wars against drugs and welfare programs, not to mention his votes for corporate "trade" agreements like NAFTA and for the illegal Iraq War.

Trump is no anomaly, no creature from outer space.  He is a mutation. He is the birth-product of the tainted and inbred late-capitalist strain of Oligarchs Gone Wild.

And Joe Biden is among the fertility doctors whose depraved policies helped to create him.

"Doctor Moreau for President!" would make a good campaign slogan for Biden, don't you think?

In fact, this picture of Biden posing in a flag-emblazoned laboratory setting with indicted blood-testing fraudster Elizabeth Holmes is the perfect campaign poster. It sends the message that while the anti-science Trump slashes and burns with a scowl on his face, Biden will always suck our blood with a jovial technocratic smile. The life-draining work of TINA will continue to be discreetly performed in the shadows of the gleaming laboratories of pseudo-democracy, just as Biden is conducting his fake presidential campaign right now.

Thank you for bringing "TINA Democrat" to my attention. A term that needs much more air time.


Considering how the Democratic Party “managed" the 2016 presidential campaign, and now appears to be following exactly the same course leading to 2020, I happened upon this remarkable piece by the late Molly Ivins that stands eerily relevant.

On January 20, 2006, from Austin, Texas, in her Creators Syndicated column, she asserts:
"I'd like to make it clear to the people who run the Democratic Party that I will not support Hillary Clinton for president."

Incidentally, here’s what she said elsewhere about Bill Clinton:
"If left to my own devices, I'd spend all my time pointing out that he's weaker than bus-station chili. But the man is so constantly subjected to such hideous and unfair abuse that I wind up standing up for him on the general principle that some fairness should be applied. Besides, no one but a fool or a Republican ever took him for a liberal.”

'Laughter is the great unifier' – behind the incredible life of Molly Ivins —
Raise Hell, a new documentary about the great Texas columnist, sends an urgent message from the Bush years to a nation under Trump with sharp humour.
https://www.theguardian.com/film/2019/mar/18/molly-ivins-raise-hell-documentary

Molly Ivins challenged us all to “Raise hell. Think of something to make the ridiculous look ridiculous.”
From my perspective, Karen Garcia does that best of all.

What are the mainstream feminists going to do? For all of her long list of official crimes and misdemeanors, Hillary was at least sold on those issues upper middle class women care about, while Biden is an unteconstitured misogynist and serial sexual harasser who would overturn Roe vs Wade if he could get away with it politically.

No doubt they'll fall in line. They always do.