The Trumps and the Royals Belong Together

What's with all the media frenzy over the Trump dynasty sullying the Windsor dynasty?

The conventional corporate wisdom is that if Donald Trump weren't such a gross oligarch, he would have cancelled his sullying of the British oligarchy -  because the invitation to sully was issued by a sullied prime minister who was forced to resign because of the Brexit mess.

And it's not just the sullying. Trump is unfairly "meddling" in British politics by referring to various British politicians as either losers or as his personal pals. This rhetoric from a sitting US president is deemed highly abnormal and deviant.

What was considered normal and proper was former President Barack Obama, right before the Brexit vote, warning the Brits on their own soil that they would suffer dire trade consequences if they dared vote to leave the European Union.

Obama had the good taste to threaten the UK with being politely moved "in back of the queue" whereas Trump outrageously called the mayor of London a "stone cold loser." Ouch.

If Trump had any normality at all, he would at least have deployed one of his political operatives across the Atlantic to properly meddle in British politics. Obama himself adhered to exceptional American procedure when he graciously didn't say a word when his campaign strategist, Jim Messina, meddled by advising both Theresa May and David Cameron as they successfully vied for back-to-back Conservative Party residencies at Number Ten, Downing Street.

Of course, the very worst thing that Trump did in preparation for his visit to the U.K. was to insult Meghan Markle. When a tabloid journalist informed him that she'd called him "divisive and misogynistic" in a TV interview during the 2016 US presidential campaign, Trump used his favorite anti-woman buzzword ("nasty") when reacting to her remarks. He hastily added that he still thought that she'd be "a successful American Princess."

Cue the mass media outrage. And be sure to preface all the diatribes with such made-for-Lifetime headlines as "The Princess Vs. the Demagogue," as the New York Times's Charles Blow did in his latest biweekly #Resistance broadside.

This contrived controversy is an irresistible way for the liberal corporate media to fulfill their perpetual assignment. Their constant duty is to divert the attention of the hoi polloi from the Class War of the rich vs the rest of us. Instead we must learn to care very deeply abut the Intra-Ruling Class War of the good billionaires vs the bad billionaires.

The plot of the latest potboiler is "Girl Meets and Marries Virtuous Oligarch Only To Have Her Happiness Sullied by Villainous Oligarch."  Peasants of the World are hereby urged to unite and defend the honor and serenity of Our Princess as she is assailed from without the walls of her castle by the Usurper to the American Throne. If we all just join together, and vicariously become Meghan Markle, we can momentarily forget about our poverty, our lack of health care,  our joblessness, our homelessness. Even if we're among the fortunate and the comfortable few, we too can find some relief from our crushing boredom and loneliness as we tune in to the saga.

Meghan Markle, according to Blow and other liberal pundits, is being punished for bravely going on TV and joking to Larry Wilmore that she'd stay in Canada permanently should her candidate, Hillary Clinton, lose. Blow paints her as the rare celebrity who broke from the mold and dared to criticize Trump, thereby putting her brilliant acting career at risk. It was almost as bold and as rare a move as if a Hollywood celebrity went on TV and cast doubt on the Russiagate cult. Of course, not even Meghan Markle could have cast doubt on the Russiagate cult before the Clintonites had even invented it. And nobody is casting doubt on it now.

Just as bad as Trump are the right-wing tabloids accusing Markle of timing the birth of her baby to cynically avoid Trump during his state visit. Maternity leave is just an excuse. So let all the righteous pick a side: unite and defend royal motherhood from the Usurper, or defend the Usurper from royal motherhood. Those are your two choices.

But before we get too carried away, we must also remember that as much as we Americans fawn over royalty, and canonize Americans who marry royalty, we must first and foremost patriotically embrace our own hegemonic system of government as we fawn from afar. Charles Blow writes:


I have no royalist fetish or reverence. Indeed, I find the existence of royalty in any society problematic. But this isn’t as much about Trump’s reaction to a princess as it is about his reaction to a woman, in this case, a black woman.

It is so problematic that Blow pulls a Trump and elevates Meghan Markle from her official title of duchess to that of princess. Methinks he doth protest too much.

He glosses over both classism and racism by making the class and race war all about Trump against Meghan Markle. By celebrating her achievement-by-marriage and by calling her a princess, he simply exposes himself as a more politically correct chauvinist. By eliciting empathy for and celebrating a wealthy woman of color, he can also ignore the fact that mortality and morbidity for black mothers and babies in the United States is nothing less than shocking and shameful.

By championing Meghan Markle's right to speak her political mind, Blow and other pundits engaged in the business of selling their Moments of Trump-Hate can also ignore the fate of WikiLeaks' Julian Assange, lying gravely ill in a British prison as the Trumps and the Windsors whine and dine, and the press corps gawk and wag their fingers at Good Dynasty vs Bad Dynasty.

And the Windsors can also bask in their own slickly marketed nouveau-liberal limelight and forget their own past fascist sympathies as they welcome a biracial American bride and new grandchild to their midst.  According to the royal family's media apologists, the Windsors were just ignorant victims of scary times. Unlike Trump, they were simply engaging in a harmless prank when they posed for the camera with their Nazi salutes. It is so unfair of the right-wing press to dredge up all those harmless scary memories, you see. 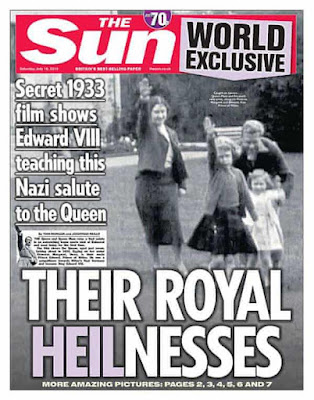 If Prince Harry can forget about once attending a costume party dressed as a Nazi, in the 21st century, then so should we, as we direct all our precious ire against Hitler-Trump.

We can also forget about Trump and Prince Andrew both being pals with convicted billionaire pedophile Jeffrey Epstein. Maybe they can reminisce on the golf course.

And we can forget about the times that Prince Charles was a perfectly willing occasional guest at Trump's Mar-A-Lago palace during his forays into Palm Beach society and elite polo matches played for charity. When Trump was still just an ordinary social-climbing real estate mogul, according to an entertaining new book by Laurence Leamer, Charles even once personally called him from his private jet to grovel and ask if he could drop by. Trump was so excited that he abandoned his golf course right in the middle of his game to personally extend the welcome mat to the equally eager Prince of Wales.

Wealth and power always attract wealth and power, no matter the source. And white male supremacy is always an incestuous match made in hell. No matter how the media narrative spins it, the Trumps and the Windsors are crispy birds of a feather. Fair is foul, and foul is fair.
Posted by Karen Garcia at 12:21 PM

The only difference between the US and UK scoundrels is peerage. But that might change, who knows?


"Just as bad as Trump are the right-wing tabloids accusing Markle of timing the birth of her baby to cynically avoid Trump during his state visit. Maternity leave is just an excuse."

What? Meghan Markle could not attend a fancy dinner because of the bump? Those royals ain't what they usta be. For example, back in the 18th Century, Maria Theresa, the last of the Habsburgs, turned out to be a tough and capable ruler of an empire. She was a real boss and, once in awhile, would order her husband (who came to the arranged marriage with much smaller holdings) to leave the council room when deliberations got into serious stuff. Marriage, bumps and babies proved to be no hindrance for Maria Theresa, as they seem to be with Meghan Markle. Maria Theresa during her 40-year reign bore 16 children.

I've only recently viewed on Netflix the first season of "Suits," where Meghan Markle as 'Rachel' is one of the principals. Someone explain to me why the series is called "Suits." More to the point would have been "Cleavages."


President Trump Wants a Promotion —
A flurry of power moves shows that being the “leader of the free world” isn’t enough for him.
So, for Democrats, when does patience turn into submission?
https://www.rollingstone.com/politics/politics-news/president-trump-wants-a-promotion-840224/
May 24, 2019 ~ by Jamil Smith

"Question: What is the connection between the American TV actress (and now princess!) Meghan Markle and the legendary German American philosopher and political theorist Hannah Arendt?
"Answer: Donald J. Trump."


Further fodder for fear and loathing:

We Are Being Embarrassed by Ugly-American Grifters on an Ego Trip to London.
The Trumps need a distraction. So, at our expense, they are trading toasts with the current occupant of King George III’s throne. --
https://www.thenation.com/article/trump-britain-royal-family-we-are-being-embarrassed-by-ugly-american-grifters/
June 4, 2019 ~ by John Nichols

Climate change is our World War III. It needs a bold response.
Critics of the Green New Deal ask if we can afford it.
But we can’t afford not to: our civilisation is at stake. --
https://www.theguardian.com/commentisfree/2019/jun/04/climate-change-world-war-iii-green-new-deal
June 4, 2019 ~ by Joseph Stiglitz