The Emperor of Ice Cream

It's the presidential summer of comfort food love.

In the cruel absence of any economic relief for struggling Americans, and in the sordid presence of too much economic relief for the war profiteers of the global battlefield, Barack Obama is doing what he does best. He's out campaigning, mingling with the masses, and ... eating. Scarfing down gallons of soft vanilla ice cream and all-American burgers for our vicarious pleasure. To show that He Is One Of Us. To make us forget his alter egos of Emperor of Drones, Friend of Wall Street, and Deporter-in-Chief of thousands of refugee children and their families.

He poked the Grand Old Party in the eye by whipping into the Grand Old Creamery during a campaign stop last week. He even, according to The Hill, cynically played at placating the sycophantic press corps by plying them with fatty sweets:


"Press, you guys want some? On me. No? Is that unethical?” Obama asked reporters who accompanied him to the Grand Ole Creamery, a Twin Cities chain. “I’m trying to soften you up.”

Obama told employees of the shop that one of his first jobs was scooping ice cream at Baskin Robbins — eliciting a groan from the workers at the rival parlor.

“No, the point is that my first job was scooping ice cream,” Obama said. “One of you might be president.”

The president ordered a scoop of Black Hills Gold, a caramel-based ice cream with pralines and cookies, in a homemade waffle cone. Obama said in his experience, scooping chocolate was more difficult than flavors like praline because it was harder.

Obama hit the ice cream parlor after a visit to the Golden Fig, a specialty food store whose owner wrote Obama a letter. 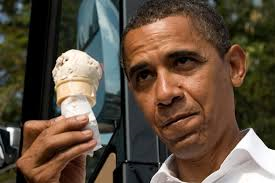 During the same visit, Obama railed against the very corporate media he was trying to bribe by accusing them of focusing on "frivolous issues" (such as polls that make him look bad)  instead of serious topics like ice cream flavors and the plight of the middle class.

It was on the eve of the last Great Depression that Pulitzer Prize-winning poet Wallace Stevens wrote what many consider to be his masterpiece. Called "The Emperor of Ice Cream," it describes the human revelry at a wake. While people carouse in the kitchen, smoking it up and gorging on sugary sweet confections, a woman's corpse moulders in an adjoining bedroom, her face carefully hidden from view, but her ugly bare feet protruding:


Call the roller of big cigars,
The muscular one, and bid him whip
In kitchen cups concupiscent curds.
Let the wenches dawdle in such dress
As they are used to wear, and let the boys
Bring flowers in last month's newspapers.
Let be be finale of seem.
The only emperor is the emperor of ice-cream.

And thus is the president embarking on what his propagandists are dubbing "Day in the Life" tours, in which he is portrayed as a chained-bear monarch breaking out of his gilded cage to mingle with regular folks at the Great American Wake. And you, too, can be entered for a chance to win a life-affirming trip to the funereal ice cream parlor, as did the lucky Rebekah of Minnesota last week. (No cigars for the proles or the press, but Obama did just quietly axe proposed health warnings on boxes of high-end cigars for the high-rolling ruling class.)

The alliterative presidential whipping of concupiscent curds will, the White House hopes, serve to drown out the terrorizing buzz of drones in the desert skies of Iraq and Texas, the growling of the empty stomachs of the one in five American children living in poverty, as well as such scandals as veterans dying while waiting for medical appointments.


The President will keep fighting his economic priorities in the weeks and months ahead, because he knows the best way to expand opportunity for all hardworking Americans and continue to strengthen the economy is to grow it from the middle out.

Notice the Freudian slip, fighting his fictional priorities instead of fighting for them.  But you have to admit that the metaphor for growing from the middle out from all that frothy curd is pretty damned clever. Wallace Stevens, eat your heart out!


Hi, everybody.  This week, I spent a couple days in Minneapolis, talking with people about their lives – their concerns, their successes, and their hopes for the future.I went because of a letter I received from a working mother named Rebekah, who shared with me the hardships her young family has faced since the financial crisis.  She and her husband Ben were just newlyweds expecting their first child, Jack, when the housing crash dried up his contracting business.  He took what jobs he could, and Rebekah took out student loans and retrained for a new career.  They sacrificed – for their kids, and for each other.  And five years later, they’ve paid off debt, bought their first home, and had their second son, Henry.

So bootstraps, people.  Bootstraps! Despite crushing debt and job loss, Rebekah and Jack took on more crushing debt and worked crappy jobs in order to pay off their original crushing debt and somehow, magically, they got approved for a mortgage anyway. And they had a second kid. So what are the rest of you complaining about? Spread the embroidered sheet, cover her face!

Yep, your president is hiding the corpse in the bedroom by dragging out the dead clunker called America is Just Like a Family again, spreading the discredited mantra that 'tis Austerity helps us grow. Even though we are still mired in a recession, the Wall Street head of our family has made it through its own extremely tough time of destroying the economy and on top of that, being forced to accept a taxpayer bailout. So rejoice, all ye who enter hell's Dairy Queen!


Today, over the past 51 months, our businesses have created 9.4 million new jobs.  By measure after measure, our economy is doing better than it was five years ago.


But as Rebekah also wrote in her letter, there are still too many middle-class families like hers who do everything right – who work hard and who sacrifice – but can’t seem to get ahead.  It feels like the odds are stacked against them.  And with just a small change in our priorities, we could fix that.

The problem is, Republicans in Congress keep blocking or voting down almost every serious idea to strengthen the middle class....

Rebekah isn't lingering in the death room, and so can you. She is getting "ahead" with more crushing debt, but other families like hers are being rebuffed by creditors. Sob. And just think, Obama could dry your tears with just one tiny ripped-off corner of a one-ply Kleenex being hoarded by the Weeper of the House, who is dawdling like a wench in yesterday's dress! (Unlike an Emperor dawdling without any clothes at all.)


This obstruction keeps the system rigged for those at the top, and rigged against the middle class.  And as long as they insist on doing it, I’ll keep taking actions on my own – like the actions I’ve taken already to attract new jobs, lift workers’ wages, and help students pay off their loans.  I’ll do my job.

He'll keep bringing you flowers wrapped in last month's newspapers and spooning verbal ice cream (instead of clamoring for government-created jobs or restoring food stamp cuts) down the parched throats of the starving.


Have a great Fourth of July, everybody – and good luck to Team USA down in Brazil.

The neoliberal remedy: Ice cream sandwiches and circuses on steroids, located, as ever, in a billion-dollar stadium smack in the middle of a teeming slum. We must turn our backs on the suffering in order to revel in the nationalistic glory of whipped up curds of muscular athleticism.

Let be be finale of seem.
The only emperor is the emperor of ice-cream.
Posted by Karen Garcia at 1:57 PM

Karen, you have such a whey with words
Especially when it comes to curds.

It takes a brilliant writer to make me laugh about some of the saddest things. Karen, thank you once again.