If you're still suffering from your bad case of Hillary fatigue, you can look forward to a respite. For one more day, at least, the queen-in-waiting's grand tour is being pre-empted by the media/political complex's post-mortem of the "stunning"" defeat of House Majority Leader Eric Cantor.

It seems like only yesterday that I was writing about Eric Cantor's sleazy financial wheelings and dealings through his shadowy Young Guns Super Pac, which finagled its way into a glowing op-ed by David Brooks.

So, Cantor's defeat at the hands of a locally popular but nationally unknown  economics professor named David Brat (probably with the aid of his Hate, Inc. media enablers) could not have happened to a more deserving specimen. Suffering defeat at the hands of an impoverished guy named Brat is also sweet, giving lie to the Supreme Court canard that money is speech, all by itself. It turns out that you still occasionally need the hideous larynxes of Ann Coulter and Laura Ingraham to give dark money an actual voice.

Brat seems to be as surprised by (and unprepared for) his victory as anyone. Talking hacks, nostalgic for their Sarah Palin "gotchas," are already having a field day with him. Chuck Todd, for example, sabotaged him with a trick question on the minimum wage. (He asked Brat for his position on it. Brat admitted he hadn't given it a second thought.) Like I said.... they (and we) can take a brief break from those tiresome Hillary gotcha questions on Benghazi and her three houses and her million-dollar speaking gigs.

Plus, let's give Eric the Dread a little credit where it's due. Were it not for him once toadying up to the cannibalistic Tea Party, that hideous Grand Bargain in which President Obama had offered up the New Deal on a platter to John Boehner would actually have come to pass. We would be gasping for toxic air in Austerity 1.0 instead of shallowly breathing in Austerity Lite. The eligibility age for Medicare would have risen to 67. Our Social Security benefits would have been cut through chained CPI. The Medicaid health insurance program for the poor would have been slashed. All kinds of programs for the public good would have been sacrificed on the Free Market altar, in the name of oligarch-enriching deficit reduction. The duopolists and the various crisis-creating "Gangs" of the political syndicate figured they could screw over the regular people by touting a token amount of revenue from the rich to balance our pain. Those closed tax loopholes could always be ripped open at a later date, snuck into a bill somewhere under cover of darkness. But cuts to Social Security would have been forever.

And then the crazy Tea Party balked at even one more penny of token new revenue. Cantor took full credit as the spoiler of a deal made in plutocratic hell and serendipitously delayed the demise of what's still left of the New Deal and the Great Society.

We should also give him a tiny bit of credit for now forcing Obama's hand on immigration. Obama, you may recall, had again gone his weasely Bartleby the Scrivener route, stating he would "prefer not to" take unilateral action on the fraught issue without bipartisan cooperation. Cantor was part of that bipartisan cooperation. That he betrayed the Tea Party xenophobes in favor of the corporate interests who wanted their cheap imported IT labor and other servants was the death knell for him. On the surface, anyway.

Stay tuned. Everybody loves a Nixonian political comeback. Maybe Eric Cantor will explore pretend-running for president or vice president as he helps wreak havoc for the rest of his official tenure, raking in the cash in preparation for his leadership position at a think tank or his own Super Pac. It's the magic of the revolving door. It's the magic of a whole panoply of mystery sugar daddy billionaires anxious to own a personal stake in our pseudo-democracy.

Eric the Dread is decidedly undead. He will always be a member in good standing of the entrenched ruling class. He's already sneering all the way to the bank.

Update: More theories on Eric's downfall: Thom Hartman (h/t Pearl) suspects that the allegedly penniless Brat had a mighty big wad of dark money secretly propping him up (via the professional hate-mongers of the Limbaughsphere as I referenced above), while Lee Fang says Cantor was defeated primarily because of voter disgust with political corruption.

Here is my response to Gail Collins' column on Putting a Cap on Cantor:

The media characterizing Eric Cantor's loss as an earthquake reminds me how Cantor treated his own constituents after a real earthquake rocked his district in 2011.

As he sneeringly surveyed the damage, he told voters that disaster relief would have to be offset by budget cuts elsewhere. But not for the banks (his wife's bank had gotten a TARP bailout). the war machine, or for his corporate cronies. If regular people didn't have the foresight to purchase earthquake insurance in a region that never gets earthquakes, he said, then tough cookies for them.

A nurse friend of mine was in a contingent of protesters who traveled by bus a month or so later seeking a meeting with Cantor. Was it the fact that all of them were wearing matching "Can'tor Won't" tee shirts that made him lock the door and call the cops on them? He was such a coward, he even staffed his town halls  with paid bouncers in order to eject people whose pointed questions he didn't like.

His "surprise" defeat was likely a serendipitous mixture of apathy, disgust with Wall Street, Democrats gleefully crashing a GOP primary, xenophobia fomented by Hate Media, Inc. and the fact that Cantor views non-rich people with blatant contempt. Who knows -- it could even have been David Brooks' primary day column praising the phony "New Right" manifesto put together by Cantor's odious dark money Young Guns SuperPac. 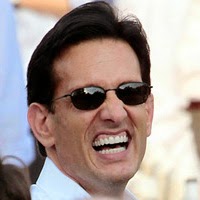 What the indoctrinated Republican rank and file want is to see the upper middle class (the real middle class) to which they belong, or aspire to, become the line below which everyone else is deservedly poor. A sort of country club Utopia. Tara updated.

What the 1% want is the upper middle class reduced to a lesser number and to the gentile poverty of say the Nixons - before Tricky Dick (Dicky always did resent those 'above' him). That is what Cantor was about and they knew it . Keep the true middle class 'hungry' and they will always heel. Makes for a good overseer class.

Cantor, is a true fascist, a corporatist and that is what the country club set doesn't want. They yearn for their Utopia but never will be allowed it.

Then came Obama to the rescue. I see future dating possibilities. I must admit that those two (Obama and Cantor) would look kinda cute together.

Could this involve a religious war with Cantor a conservative Jew and Brat a highly religious Christian?

stranger in a strange land said...

Article on Bill Moyers' site offers another glimpse of Brat:

Why has the United Nations not been consulted in Obama's plans for Iraq? Pages and pages of obligations by member nations are listed in Wikipedia which includes the purposes and regulations and of the Security Council especially. Of course the UN is rarely consulted with plans for invasion, military involvement, droning plans etc. by the U.S. government.

I should think the UN would be consulted by Obama about the Iraq crisis and he could then blame them if things don't simmer down. Too simple I guess. Or maybe they forgot to pay their dues as has happened before.