Since you're all probably suffering from a severe case of Hillary Clinton fatigue by now, I thought I'd give everybody a break and and discuss that equally dapper white centrist -- David Brooks of the New York Times. 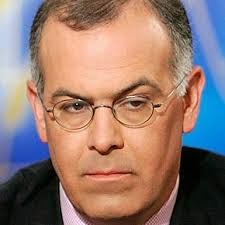 With lesser-evil Democrats throwing out such tasty morsels as aspirational cap-and-trade (just in time for Doomsday), and bestowing student debt forgiveness upon a chosen few lucky duckies, the Republicans are desperately playing catch-up, in hopes of winning a seat (or fifty) on the pseudo-populist bandwagon. So they're doing what they always do -- they're plastering a shady new shade of lipstick on a pig. They've issued a manifesto called "Room to Grow," and the reliable Mr. Brooks has obligingly given it penthouse column space in which to luxuriously metastasize.

The fact that he labels the agenda "The New Right" is your first clue.The next clue is that when you click on the link he so thoughtfully provides, you discover that the propaganda e-book he's touting is a product of something called the YG Network. No, it isn't Why???? Gee!!!!  It stands for "Young Guns" -- now initialized, probably because they don't want readers to confuse them with those white supremacist mass murderers. Because, the Republicans are merely white supremacists who don't want to take the guns away from the mass murderers.

Brooks also forgets to mention that the manifesto is the production of one John Murray, former deputy chief of staff to original Young Gun Eric Cantor. Before heading to Congress, Murray had lobbied for both AHIP, the health insurance cartel, and Big Pharma. The manifesto that Brooks is shilling for is actually a front for a gigantic SuperPac that Murray started when he left government "service" to cash in. From Politico:

Murray, with the help of former Cantor aide Rob Collins, is launching the new PAC as a fundraising vehicle that will be able to accept unlimited contributions from corporations and individuals and spend money to elect “free-market, pro-business” candidates.

Alongside the super PAC, Murray is launching two nonprofits: a 501(c)(4) that will be able to run issue advertisements and a 501(c)(3) that will commission studies and run educational programs.

The common thread running through all three organizations: the Cantor-Ryan-McCarthy brand, which got so much attention in the 2010 elections and will try to capitalize on the new world of lightly regulated, unlimited corporate and individual money.

With the super PAC, Cantor’s former aides will be able to pour money into the election efforts of candidates who are in the Young Guns’ mold — conservative and ready to challenge the establishment.

So, I guess the "Room to Grow" (Pinocchio noses)  manifesto must fall into the category of tax-deductible educational program for ruling class fun and profit. Don't you just love it when studly young establishment types pretend to pack heat as they pretend to challenge the establishment and educate the masses?

But meanwhile, it is David Brooks's task to cover up such greed and dishonesty with his usual concern-trolling gobbledygook. He enthuses,

In the first essay of the book, Peter Wehner moves beyond the ruinous Republican view that the country is divided between hearty entrepreneurs and parasitic “takers.” Like most reform conservatives, he shifts attention sympathetically to the struggling working and middle classes. He grapples with the fact, uncomfortable for conservatives, that the odds of escaping poverty are about half as high in the United States as in more mobile countries like Denmark.

You may remember nouveau-compassionate conservative Wehner as the bloodthirsty Bush speechwriter/attack dog who beat the war drums for the Iraq invasion while spewing "Christian" values. You also may remember him (Brooks pretends not to) as an enthusiastic member of Mitt Romney's "makers vs. takers" campaign team!

Brooks, meanwhile, avoids giving a mention to the manifesto contributor writing about the unemployment crisis.

Since Congress recently condemned millions of long-term unemployed Americans to destitution by refusing to extend their jobless benefits, I was anxious to read the chapter on how the "New Right" plans to help them. Boy, was I ever in for a treat.

Michael Strain, of the American Enterprise Institute, thinks that kicking people when they're down is just the ticket.

For starters, he wants to give them a one-way ticket out of town.... to wherever those great mystery jobs are rumored to be there for the taking.

Then, Strain suggests that "the federal minimum wage requirement that forces employers to take a $7.25 risk on an unemployed worker" should be scrapped in favor of a sub-minimum wage for people out of work six months or longer.... until such unspecified time that they can prove themselves. Meanwhile they may qualify for a short-term loan, with interest, that they can pay back while they're raking in their pitiful wages. Feudalism, much?

Strain also thinks that work-related licensing requirements (enacted for the public's welfare) should be scaled back or scrapped altogether.


Of course, this blatant brutality makes the Dems' own measly $10.10 minimum wage proposal look like manna from heaven. Which, after all, is the whole point of the bait and switch political duopoly owned and operated by a de facto plutocracy. The proles are allowed to go to the polls and choose the best of all possible evils.

Karen, you are brilliant.

I think it is time to implement a maximum wage and, more importantly, maximum wealth. The current economic inequality is pushing societal destabilization- rapidly. I believe that the alternative to instituting a maximum wealth will be totalitarianism and ecosystem destruction.

It seems that our political duopoly managed by the Oligarchy has chosen the latter for us.

How could we possibly put caps on maximum wealth with all the loopholes now being used to squirrel away ill begotten wealth in various countries, islands, mattresses,ad infinitum. We would have to change the whole system to something better among other things but its worth a try. At least we must try and get a progressive tax system going with strict regulations. It doesn't work too badly in Canada.

We need capital controls, and we need to tax all wealth over a certain amount at 99%.

I think the amount should be set at about $7 million.

If the squillionaires don't like the tax, they can leave, but they can only take $7 million with them. Think about how many sociopaths we could purge ourselves of? Just the thought of all those greedy narcissists leaving makes me smile.

Just out of curiousity, how did you arrive at the figure of $7M as the figure above which it is "just" to expropriate 99%?

Not that I don't agree with you that $7M in annual income should be enough for anyone (it would certainly be more than enough for ME), but you speak with such authority that the number must have some moral basis other than that it makes you feel good?

As Pearl has remarked, the "squillionaires," as you have described them, have probably already squirreled away untold gazillions in wealth in various foreign "countries, islands, mattresses, ad infinitum."

Are they really going to care? Or are they just going to turn in their U.S. passports and move to Singapore or Dubai or Brunei or wherever, cut themselves a great deal, and carry on as before?

Even if you could find the "untold wealth" that they've already secreted away, how would you get at it, assuming that it was "legally done" under some previous legal loophole? What would you do? Some kind of retroactive "Bill of Attainder," which is explicitly outlawed by the U.S. Constitution? (I'm not saying that I'm an expert on ex post facto law here.)

Personally, I'm not feeling wealthy enough to pick up the slack on my own.

Doubtless, I've overlooked something here, but I'm curious to understand exactly WHAT.

I think we could do very handily without the 1%; with a few exceptions they're a highly overrated bunch. One of those exceptions is Warren Buffet, a useful man I think. But so many of the others aren't worth rat shit.
Still the job can be done without sending them off to, say Singapore. A beginning would be to get the money out of politics.

I meant the $7 million to be a lifetime wealth maximum, not an annual salary. I think the richest people in the world don't really have "salary;" they just own the exploitation process of people and Earth. So taxing salary is not as effective as taxing wealth.

I came up with the $7 million figure by taking what my mom said is enough money for anyone to live well on ($1 million) and I multiplied it by seven. I multiplied $1 million by 7 because I knew whatever figure I came up with would be met with shock and anger by the greedy rich, and I wanted the figure to be enough that no-one could possibly claim hardship if subjected to the figure. $7 million is, like my mom told me about 30 years ago, is 7 times greedier than the most spoiled asses among us should ever accumulate, so the figure is actually an incredible compromise.

Continuing to allow the limitless monetary exploitation of people and Earth will destroy our planet. There is not a single mathematical model of unlimited economic growth that allows for the diverse habitability of the planet, not a single model. When people are exposed to this reality, especially economists, they will inevitably say something like, "We have always faced dangers and we have always survived."

Saying that we have survived, so we will continue to survive- is not reasoning, it is religion. And excuse me for not wanting your religious beliefs today to determine whether my grandchildren grow up in a war torn environmental disastrous planet.

Plus, the people who believe the religion of endless growth and profit are simultaneously some of the greediest and stupidest people on the planet.

We currently have capital controls. We can seize the Oligarchs of Russia's money and we can freeze and seize the assets of anyone the government deems to be a Terrorist™.

The thing you have overlooked is that the US economy is behaving exactly like a parasite. It rewards horrible behavior, like hedge fund managing and it punishes the shit out of people who work at food kitchens. This economy gives sociopaths like Donald Rumsfeld and Lloyd Blankfein hundreds of millions of dollars and will simultaneously jail someone who tries to stop the Keystone XL Pipeline. We are stealing the planet from future generations and all of the other sentient creatures that share our planet with us.